You Are Here: Home/Blog / The History of Rugs

The History of Rugs 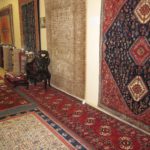 When you look down at your area rug it may be quite difficult for you to consider the role they played throughout history and the overall history of rugs in general. Your area rug comes from a history of products that have been made since the year 3000 BC. There are many stories about rugs of the ancient world and art pieces that actually told stories and displayed artwork from the past.

Carpets were originally told as being magical such as in the stories of Aladdin and his flying carpet. Rugs throughout centuries like Oriental carpets have also inspired literature, music and art. With high quality craftsmanship as well as different styles that can be found throughout Mongolia, Turkey and the rest of the world the products that are produced by rug makers are highly sought after worldwide. Area rugs and their designs can tie many cultures together as well as create distinct looks for each type of region and art work. Throughout the years rugs have come a long way from weaved rugs all the way up to the modern area rugs that you may have in your home today.

In 3000 BC a number of nomad tribes started weaving together rugs in order to make some of their earthen floors a bit warmer. They would often weaved together hair from different types of animals like goats, sheep and camel to form rugs that would be perfectly suited for the use on floors and in other areas. These rugs were not meant as extensive decorations but rather something that was designed more so for warmth.

In 1000 BC the Pazyryk design was one of the first that was created that resembled the look of a carpet. These types of rugs would have over 300 kn in an inch and they could create a beautiful look that was capable of covering a larger area. These types of looks became extremely well-established around that time as a premiere rug for warmth and bringing a room together.

In 500 BC the classic style Greek rugs called Agamemnon were commonly introduced into homes. The style of rugs often told various legends and we only know about many of their designs from their descriptions in Greek classic stories.

By the seventh and eighth century, rug making had spread worldwide and it had been a long-established process for several thousand years. This is a time throughout the Middle East where rug making became a true art form. In the Middle East much of the spiritual tales as well as some of the economic stories of the time are portrayed in the look of artwork in rugs. A large number of these rugs still continue to be produced in this beautiful style to pay homage to some of the original craftsman.

The invasion of Caucasus actually brought on Islamic beliefs and the art of rug weaving in the region began to expand. Throughout the eighth century the idea of rug making only continued as a state of the art technique for displaying beautiful works of art and improvements.

Art on rugs would eventually make its way into Europe through the Crusades. In the 13th and 14th century carpet weaving became very popular in Europe thanks to the rug furnishings of King Louis IX. In 1277 furnishing popularity for rugs continued to spread throughout France. This was also a time where Christian figures like Jesus, the Virgin Mary in a number of saints were depicted on rugs.

The prestige and art form of owning one of these rugs in the 15th century became a massive status symbol. Many noblemen of the time actually had their portraits painted showcasing their ownership of Turkish rugs or rugs from the Ottoman Empire in the background.

The process of rug making and its prestige actually continued throughout the Qing Dynasty in China, with the middle east in the Safavid dynasty as well as the Ardebil carpets which are known for their encrusted look with Jewels.

By the 17th century Henry IV actually set up carpet production throughout his place in the Louvre of Paris. There were a number of floral style motifs, various Christian symbols as well as a number of coat of arms that got integrated into some of the designs of the 17th and 18th century. By this time Great Britain had control over Indian manufacturers who had been manufacturing high quality rugs over generations.

The textiles industry only continued to flourish in the 20th century through the Communist takeover of China, mass production of rugs and a greater wealth of textiles across the worldwide market.

Important Tips for selecting the Best Rug Cleaning Company 11 May , 2018